The last week I received a telegram message about Gtranslator, that was unmaintained for a long time. GNOME translators uses different tools to translate .po files, Gtranslator is a tool for translator that is integrated with the GNOME desktop, but with the time, Gtranslator is getting old and there are several known bugs that never get fixed.

So I decided to go ahead and become the maintainer of Gtranslator with the main idea of update the interface and fix mayor bugs.

Why we should care about Gtranslator

PO files are plain text files that can be edited with any text editor, but there're a lot of tools for translator to simplify the edition of .po files, these way the program will avoid formatting problems and can also provide some tools to help in the translation.

There's a lot of tools to edit .po files, so, why we need another application? why translators can't pick another useful tool if Gtranslator is unmaintained?

The main reason is the same as we've a text editor or the gnome-builder or other developer tools, because all users want to use applications integrated in the desktop, so it always will be better for a GNOME user a native GNOME app to edit .po files than a Qt one or a webpage.

The other reason is that we need to simplify the translators life to have better and more translations and that can only be done if we're developping the tool that translator will use, because in the future we can integrate Gtranslator with the gnome gitlab, or with Damned Lies, to download or upload translation files.

Gtranslator has a GNOME 2.0 interface, with toolbar, menus, statusbar and dockable widgets: 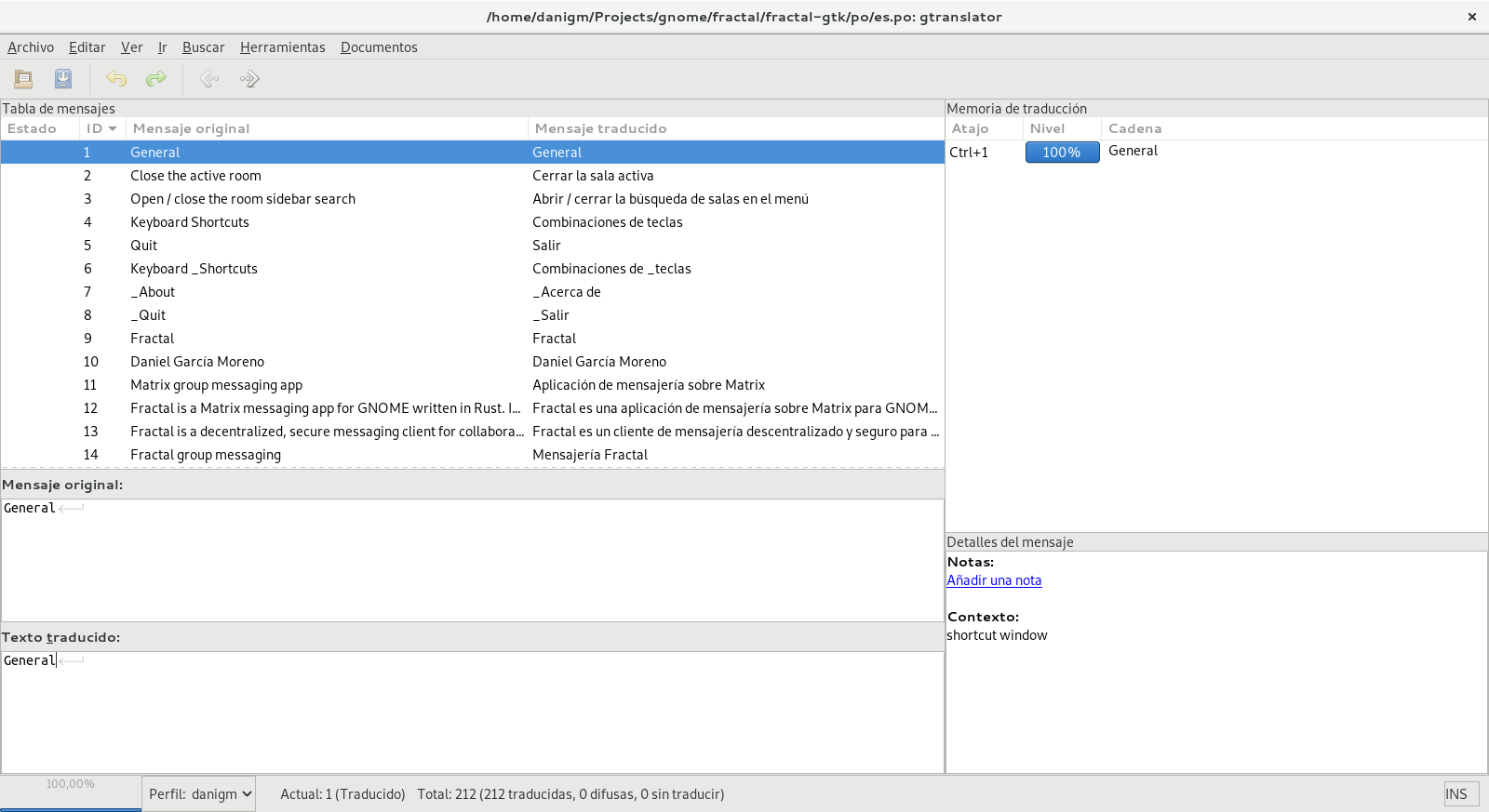 But in the git repo, the main branch was broken. Someone starts a big refactor, in 2015, to try to update the interface to look more like a modern GNOME 3 application but that refactor never ended so the master branch compiles, but doesn't do anything. There was a lot of widgets that was half ported to a modern code.

There's also some designs to modernize the interface, but the work wasn't finished.

My plan is to continue that work, modernize the UI, remove all deprecated code and warnings and then continue the development from there.

I don't want to spend a lot of time reworking the whole app to have a new one in two months, I want to have a functional app as soon as possible, and continue with a continuous development, improving the UI and the functionality needed by the translator team.

So the roadmap that I've in mind is:

What I've done in one week

I started updating the build system, from autotools to meson build, and then I've added a flatpak manifest file, so now gnome-builder is able to build Gtranslator using meson and flatpak and it's easier to develop this way.

This build tools modernization is great because with the new gitlab we've now continuous integration, and that means that the gitlab compiles and generates a flatpak bundle for each commit, making it easier for testers to test new functionality or Merge Requests, you only need to download the .flatpak and install locally, no need to build at all. 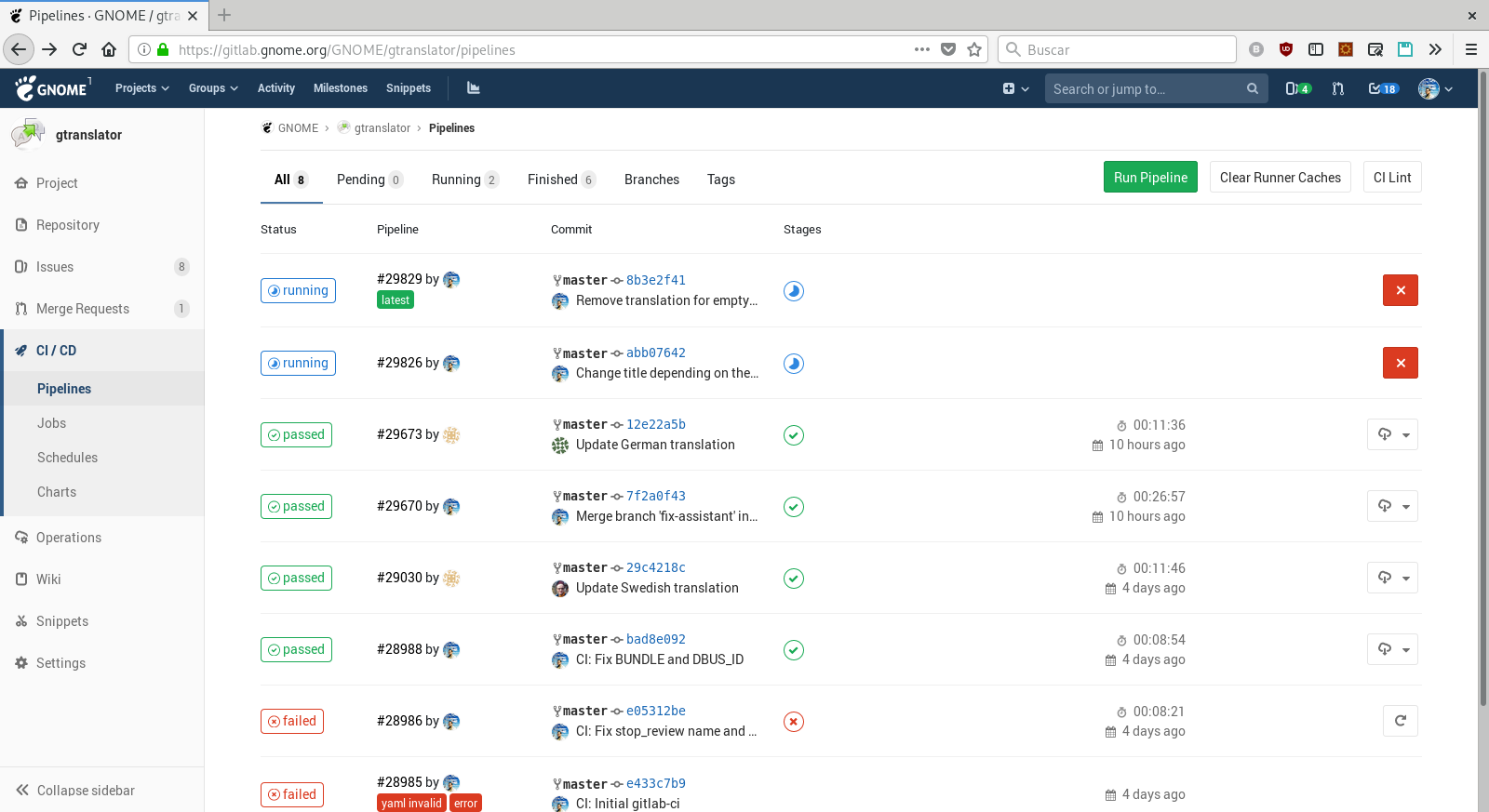 Then I started to fix the master branch. There was a project selector view and then you go to the translation view. There was only the .ui files and not working yet, so I reworked that a bit and convert the project selector to a file selector for now and then when you select a file, you've almost the same old interface, but without the menu, toolbar and statusbar. 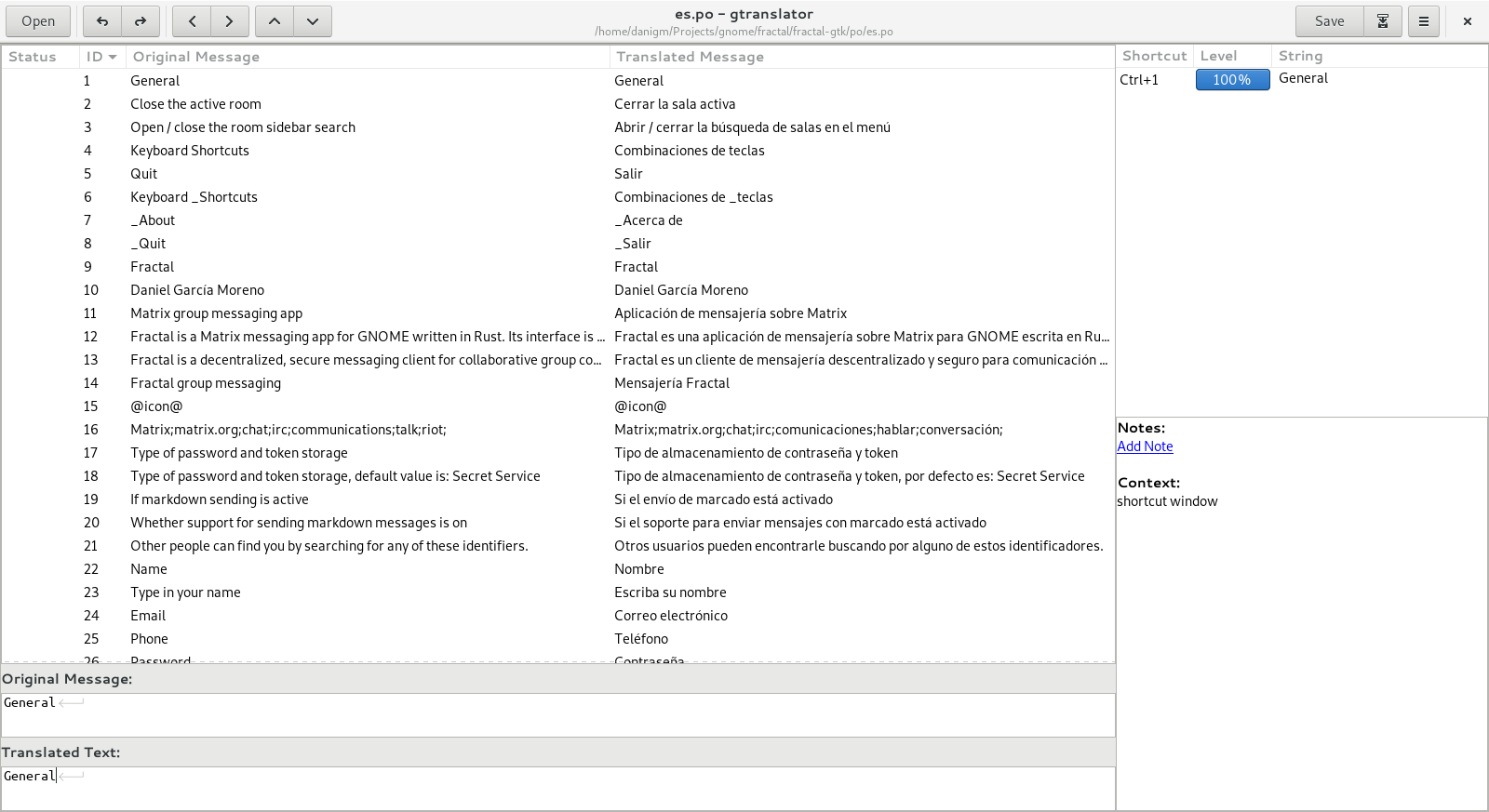 I've been moving the toolbar icons to the headerbar so we can have the main functionality working. We've now a functional application.

Gtranslator has a plugin system and has eight plugins, but that plugins was disabled some time ago. So I've started to recover that functionality but instead of as plugins, I've started to move the plugins to the core app code.

The only plugin ported currently is the translation memory. I'll take a look to the other plugins and view if it's desirable to reimplement that or remove that code.

All the statusbar functionality is missing right now, I need to find some place in the new UI to show that.

I wan't to start as soon as possible to work in a new widget to show messages, instead of the current table.

So if you've time and want to contribute in this project, go ahead, you can ask in the #gtranslator IRC channel or talk to me directly. Currently there's no a lot of issues in the gitlab, but as soon as I get a functional version in gnome-nightly flatpak repo and some translators starts to use it, we'll have a lot of things to do.