The Tuesday 11th started the second Fractal Hackfest. I've organized this hackfest in Seville, the city where I studied computer science and here I've a lot of friends in the University so is a good place to do it here.

The weather was important too for the hackfest selection, in December Seville is a good choice because the weather is not too cold, we're having sunny days.

The first day was a good day, thinking about some relevant issues and planning what we want to do. We talked about the work needed for the interface split, about the E2EE support, new features and the need for a new release.

Meantime we have to thanks to Julian Sparber the hackfest wifi, because he's using his laptop to stream the eduroam connection.

The first day we try to promote as a newcomers day, and some people comes. We've some contributions and I spend some time trying to help people to introduce to the GNOME community.

The GNOME Foundation payed for a Fractal dev day dinner, so we should thanks this great dinner to GNOME: 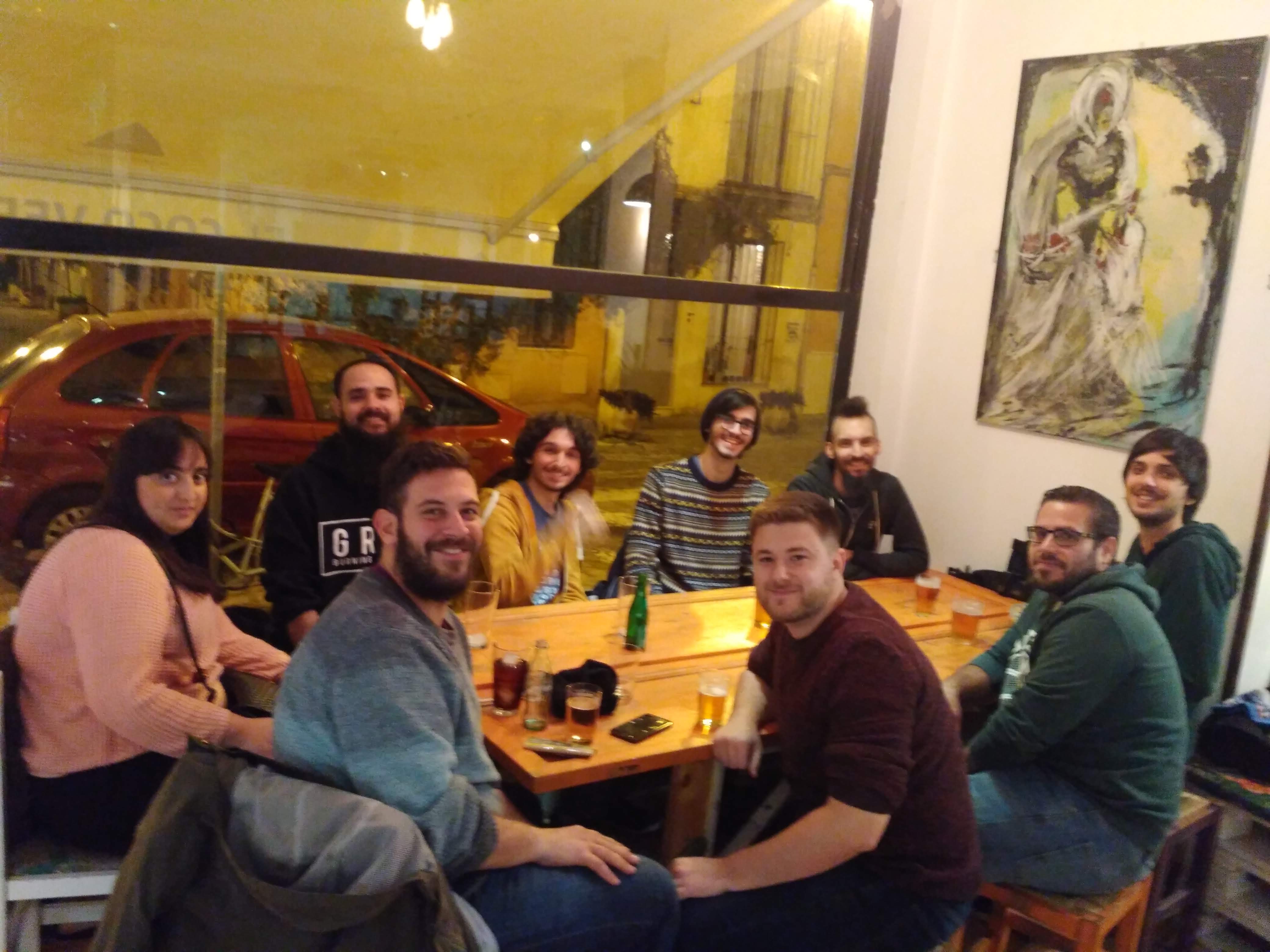 We've a good time eating and drinking in the Coco Verde. We talk about GNOME, the desktop, matrix.org and other communication tools.

Today was a hacking day, so we started to work in the stuff that we talk about yesterday. We've resolved some minor issues and I started with the fractal-backend crate. 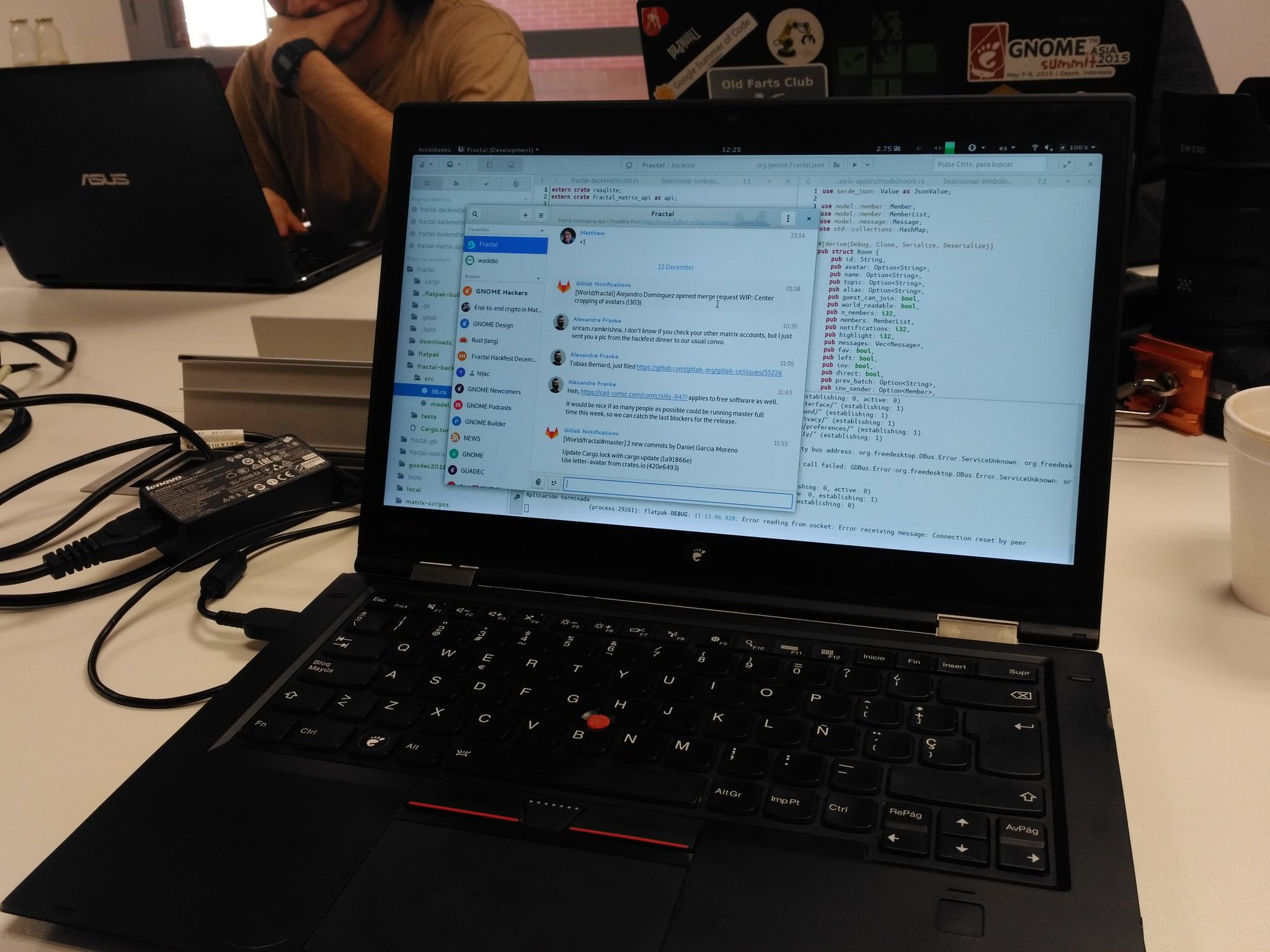 We talked about move all the app data model and logic to the fractal-backend and leave fractal-gtk only as UI management.

We talked about the LMDB use to store rooms and messages and we decided that the best solution should be to use a relational database, because we've relations and with the key-value thing we'll end creating those relations and maintaining by hand. In any case, I've this decision in mind and I'm implementing all this with a trait to hide the storage detail so we can change easily in the future.

So today I've spend a lot of time implementing this trait and a first implementation for the Room struct. I've decided to use rusqlite instead the diesel orm because I want to keep it simple.

I want to finish all the database storage and move the AppOp main loop to the fractal-backend and try to update the fractal-gtk to use the backend instead the AppOp struct to get the rooms and messages. But maybe is a lot of work, I don't know if I'll be able to finish this before the end of the hackfest. 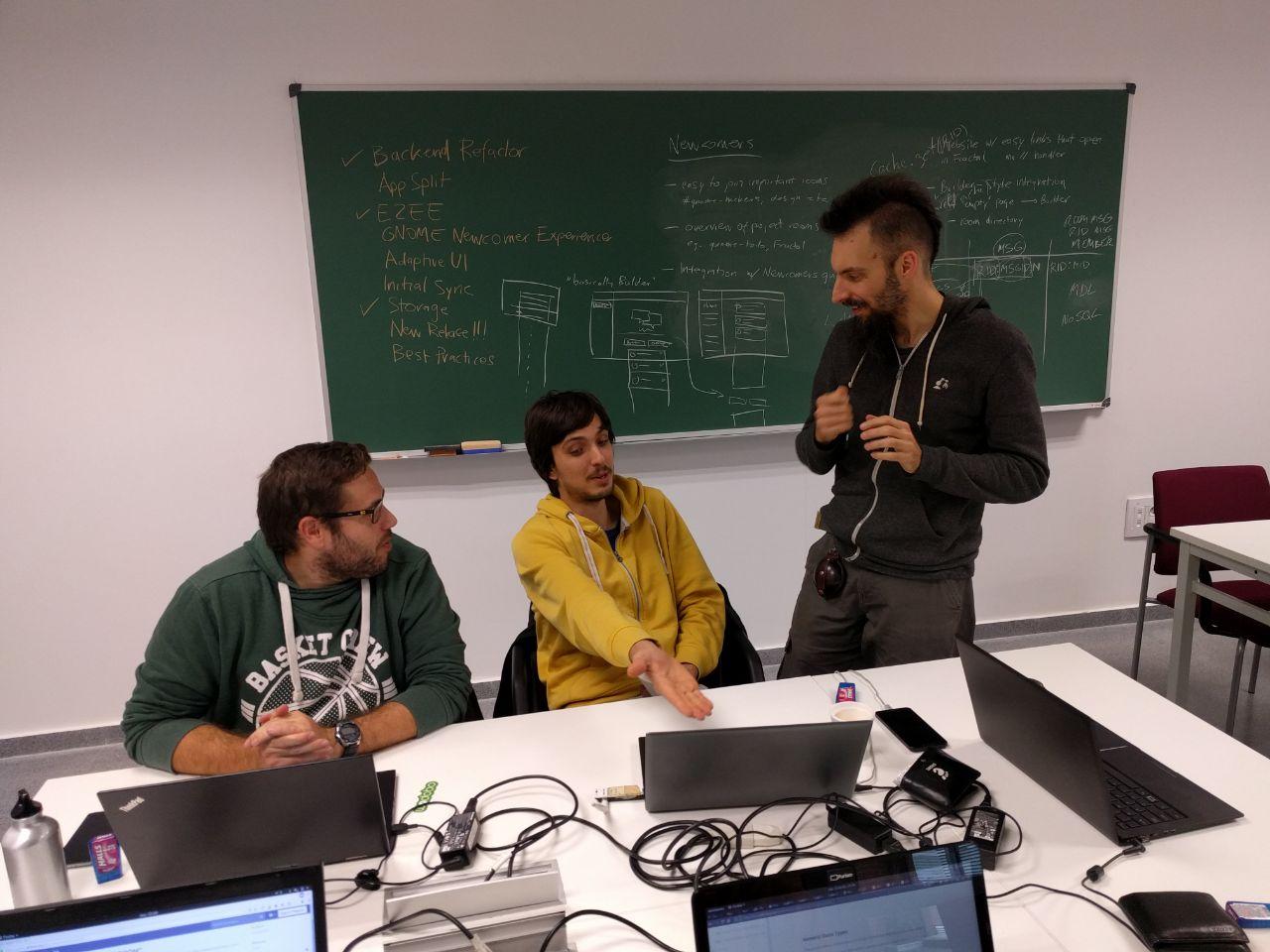 This hackfest is possible because there's a lot of volunteer work and people helping us. First of all, the Fractal core team that comes Tobias Bernard, Julian Sparber and Alexandre Franke and of course the GNOME Foundation. And also we've to thank Alejandro Domínguez, a newcomer that is doing a really good job fixing bugs and cleaning some old code. 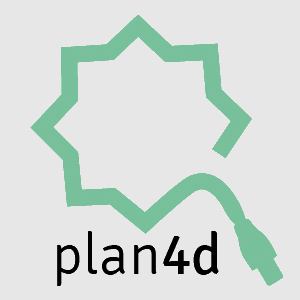 Plan4D is giving us some help with the place and cookies, fruits, juices and some tea.

And finally I want to thank again to my coworkers in wadobo because they support me to spend a full work week working in gnome and they also spend some time helping us to organize all the hackfest stuff.